Good-bye with Grace and Blessings

On Friday, July 13, the Sisters each left Rome to return to their local missions.  What a blessing this time has been for us as individuals and communities.  We return with a renewed spirit of faith, hope, and love, and pray we may bring this spirit of the joy of the Gospel, first, to the other Sisters in our communities and, then, to all those we serve in the apostolate and whom we meet.

Visit to the Excavations under St. Peter's Basilica, the Venerable English College, Mass at the Rooms of St. Ignatius

As our second to last day of pilgrimage in Rome, yesterday was filled to the brim with visits to special places of grace.

We started the day with a visit to the Venerable English College.  In Rome, the word "college" denotes a residence in which seminarians live, pray, and receive formation.  However, it is not a place of studies.  The seminarians from the various national colleges study at one of the many Pontifical Universities throughout the city, for example, the Gregorian (run by the Jesuits) or the Angelicum (run by the Dominicans).

The College for seminarians from England has the very unique title of "Venerable."  This is because, during the time of persecution of English Catholics in the 1500's, the seminarians who studied in Rome to become Catholic priests were almost certainly going to be martyred when they returned to their home land to minister to their people after ordination.

Below is a very famous painting of the Holy Trinity is in the chapel of the English College.  Below the image of the Holy Trinity at the top and above the portrayal of famous English saints on bottom, is a picture of an arched gateway.  This is a representation of the North Gate of the city of Rome which the English priests would walk through on their way home to England from Rome. Crossing through this gate forebode almost certain death for the newly ordained priests.

During the time of persecution, it was a tradition that when the seminarians and priests of the College received news of another martyrdom of one of their brothers, they would all gather around this picture and sing the Te Deum (an ancient hymn in honor of the Holy Trinity).

One of the Sisters in our group, Sister Faustina Joseph, CFR, is from England and is also missioned with a group of her sisters in England.  Her personal background made the visit especially meaningful.
Next, we went to the room where St. Ignatius of Loyola died and were honored to have Mass celebrated for us there by Father Maher, S.J.

In the afternoon, we went on a scavi tour, that is, a tour of the excavations under the Basilica of St. Peter.  It was known throughout Christian history that the Emperor Constantine built the Basilica in honor of St. Peter over the site where the Apostle Peter had been buried after he was martyred.  However, there was not much archaeological evidence for this until the middle of the last century.


When Pope Pius XI died in 1939, he expressed a wish to be buried as close as possible to the tomb of Peter.  As there was not a space easily available, workers started to expand a place in the crypt of the present Basilica to put his tomb.  As they were digging, one worker started to fall in to a surprising hole in the floor!  It turns out that this "hole" was actually the inside of a pagan mausoleum that was part of the pagan necropolis (city of the dead) which Constantine had to cover in order to build the first Basilica.


In 1939, Pope Pius XII gave permission for excavations to be carried out. These excavations took place over a period of 16 years.  It was an arduous and delicate task to carry out the excavations since the digging had to be done from the bottom up due to the present basilica being supported in large part by the mausoleum walls in the necropolis. In the third year of the excavations, the bones of the Apostle Peter were found.

The scavi tour is a very privileged opportunity to walk down through part of the ancient street of the necropolis, look into pagan and Christian mausolea, see parts of the the various monuments to honor St. Peter that were successively built over his tomb throughout the centuries, and, most importantly, to venerate his relics and pray at the Tomb of the first pope.

While pictures were not allowed in the tour, these images have been found online and correspond to what we saw yesterday:


It was a deeply moving experience for all.  Our tour guide, Karen, was clearly a woman of great faith who takes her position seriously as a way to help others to grow in faith too.  She was very generous in taking extra time with our group to answer questions and give us more time to pray at the tomb.

Yesterday (Tuesday, July 10), we had the wonderful privilege of taking a two-hour train ride to Assisi to visit with St. Francis and St. Clare.  It was a particularly providential trip because one of our Franciscan Sisters, Sister Veronica Catherine, CFR, celebrated her feast day yesterday!

We started the morning with a 7 a.m. Mass at a beautiful church dedicated to the Sacred Heart of Jesus that is located a block away from the train station.
We then took the train to Assisi, enjoying the view of the quaint Italian countryside on the way.

We have arrived!!
Arriving in Assisi, we went first to the Basilica of St. Mary of the Angels.  Conserved within this Basilica is the portiuncula, the little chapel where St. Francis and his brother friars first began to gather to pray and near which they first lived.  Within the walls of the Basilica is also the chapel of the transitus.  The transitus chapel was built over the spot where St. Francis of Assisi died.

The next stop on our Franciscan adventure was to visit the Basilica of St. Francis which is a bus ride up the hill to the town proper of Assisi.  St. Francis is buried in the crypt of this Basilica, as well as are many of his first followers.
A beautiful part of our day was celebrating the Feast Day of Sister Veronica Catherine of the Pierced Heart of Jesus, CFR. She is named after St. Veronica Giuliani, who was a Franciscan in the Capuchin tradition. What a blessing to be in Assisi on this day of all days!

Visiting Assisi is a true pilgrimage because in order to go anywhere in the town, one must traverse the many steep hills of the town.  The Basilica of St. Clare is on the other side of the town and it is truly a trek to reach her.


In the Basilica of St. Clare is her tomb, as well as the famous San Damiano Cross.  This cross, now kept in this church, was originally in the small chapel of San Damiano, located slightly below the walls of the town.  It was when St. Francis was praying before this cross in San Damiano that the Lord spoke to him from the cross and said, "Francis, rebuild my church."


At first, St. Francis interpreted this request of the Lord literally.  He began to restore the actual church building of San Damiano, even going through the town begging for stones to use to restore the collapsed building.  Eventually, however, St. Francis began to realize that the vocation to which God was calling him was to spiritually bring new life into the church which had grown overburdened with concerns of the temporal world and had largely lost the true evangelical spirit of the Gospel of Christ.

The Basilica of St. Clare is also a very special place because there are many relics of St. Francis and St. Clare conserved in the museum below the Church.

It was an incredible day!
Posted by Domus Summer Program 2018 at 6:14 AM No comments: 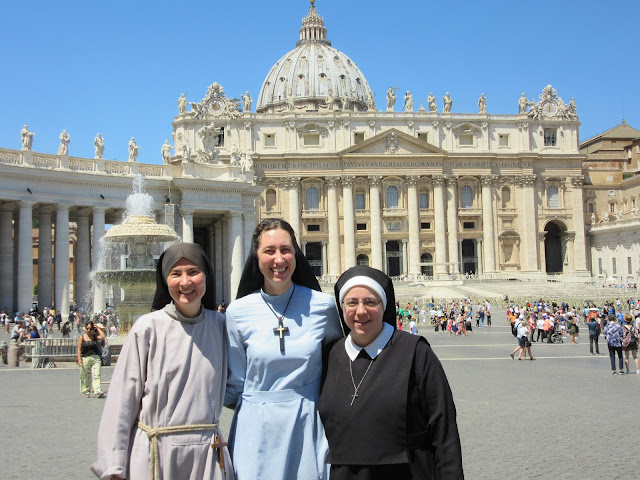 On this glorious Sunday, the day of the Lord's Resurrection, we enjoyed sleeping in a bit and then attending Mass once more at Santo Spirito in Sassia where Mass is celebrated for English-speaking pilgrims each Sunday.  St. Peter's was just a short walk away, so we waited in the shade for the Pope's Angelus address.  In the meantime, it seemed like a great opportunity to take a photo of our three "Gunnison natives."  At supper one night last week, it came up that Sister Mary Hanah, RSM, (center) and Sister Mary Faustina, SJW, (right) discovered that their dads were from the same small town of Gunnison, Colorado.  To which Sister Veronica Catherine, cfr, (left) exclaimed, "My dad's from Gunnison, too!"  This just goes to show that the Holy Spirit works in mysterious ways and that His call can be heard anywhere!

As the clock struck 12:00, Pope Francis appeared at the window. Although we had already seen him on a couple occasions now, it didn't dampen our enthusiasm.
The Holy Father spoke of the Gospel of the day and how Jesus was not accepted by the people of His hometown.  In the same way, we can sometimes miss Jesus' presence and workings in our lives because He comes in unexpected and surprising ways.
Ju

The afternoon held more "holy adventures" as we have been calling them.  One that was particularly fun was crossing paths on our way to St. Cecilia's in Trastevere.  Several Sisters decided to take the bus while others walked.  As the walkers came up to a stoplight, we spotted those riding on the bus and waved enthusiastically.  (So what if the Romans think we're crazy!)

Mass at the Tomb of St. Pope John Paul II and other Adventures

Our day of adventures began with Mass at the tomb of St. John Paul II, celebrated by Cardinal Stafford, located in a side chapel in St. Peter's Basilica. After Mass, the sisters split up into pairs or small groups to go to various locations around the Vatican and the City of Rome.

A few sisters braved the long climb to the top of the cupola or the gigantic dome of St. Peter's Basilica. When reaching the first level, the view is from a walkway inside the base of the cupola.  The size of the mosaics can be viewed from a different perspective than from the floor of the Basilica.   The images and words are large for people to be able to view it from the ground.  As the viewing distance increases that size of everything increases so things do not appear as far away as they are.

From the top level of the cupola, the view is only on the outside of the Basilica.  The view includes the city of Rome, the Vatican Gardens and all of the visible parts of the Vatican City. 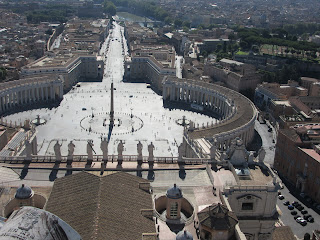 A couple groups of sisters went to Santa Maria della Concezione dei Cappuccini or the famous "Bone Church" of Rome.  The church and the attached crypt and museum is administered by the Capuchin Franciscans.  The church is the home of the relics and remains of St. Justin, Martyr and the Capuchins St. Felix de Cantalice and St. Cryspin.  The lower level contains a museum of Capuchin history and the crypt holding the rooms of the bones of some 4,000 friars.
After the visit to Santa Maria della Concezione,a couple sisters journeyed further to the  small Carmelite church of Santa Maria della Vittoria which is the home of the famous Bernini statue of the Transverbertion of St. Teresea of Avila. Unfortunately, the church is undergoing renovations and the statue can only be seen through the scaffolding.